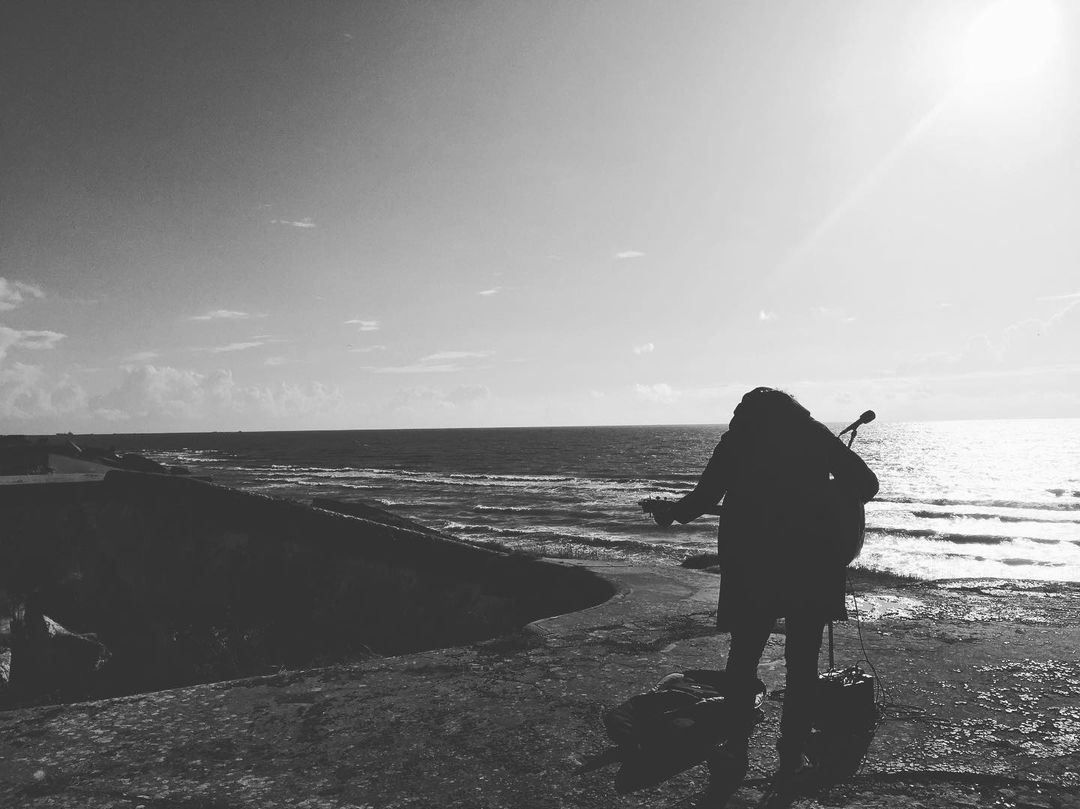 This year, eimarIndra released his debut album. He has been a regular presence in the Icelandic music scene for some years now, and his original folk-ambiance sonority has been gaining him some attention all over the world. “Softer now?” is what is probably his most minimal song to date, with a minimalist approach to electronics, a soft piano melody, and his delicate falsetto-like vocals sounding very personal. Dreamy, honest, melancholic, and fragile, there is all through constant evolution in the track, and the hymns of Iceland that come through every corner of the track are a beauty hard to ignore.

After his debut album, “Old Loved Ones“, Great Men With No Fear returns with “Milwaukee’s Rime” a track that from the first guitar bits sounds earthy and proper folk. Filled with singing that could be described as more classical, but that still finds its way to sound new and out of labels. There is clearly a poetic and melancholic universe that is already described as his own style. The track “evokes the revival that follows the frost melting. A dreamlike epic throughout the seasons, a metaphor for the period of lockdown that finally gives way to life. The demons of winter fade away in the captivating light of these soundscapes that invite us to introspection, between softness and fragility”. Trust us, this is not just another song about the lockdown, but a track filled with a sensibility about life that somehow found a way for the listeners t actually feel like they watch and hear the snowmelt and the ice crack. And everything feels tender at the same time.

Hollow Coves’ new EP “Blessings” was released last June and is one for the Folk lovers for sure. To mark that we’re featuring the title track “Blessings” a track about gratitude. They say “It’s about recognizing the little blessings that life has to offer. If we don’t take a moment to acknowledge them, we can often miss them. Practicing gratitude is known to be good for mental health, yet anxiety and depression seem to be more and more prevalent in our generation. I think we are just too distracted to stop and take time to practice gratitude”. We, ourselves, feel that sometimes we need to practice it more. We have so many things to be grateful for nowadays, that is actually ridiculous to think otherwise. For example the amount of chilling and inspiring feelings that a soft acoustic guitar and some beautiful vocal melodies with some deep drumming in the back, actually feel. “Blessings” is a perfect Folk track that offers a grateful sonority and bags of flavored melodies and hooks to sing along.

Directly from the vibes where our favorite The Villagers live, comes INDOLORE. Well, actually from the Baltic Sea he comes with “Oh Boy” a track taken from his incredibly calming debut album entitled “After The Rain“. He says this is a track about life feeling good after the rain, and we agree. Both metaphorically and literally. Clearly influenced by his distant Irish roots, there is a happy gilt about INDOLORE’s sonority to which the track lives up perfectly. After opening up for acts like Sia and Morcheeba and collaborating with Terry Reid this might be it for him, with a gorgeous track (and album) that lives up to the true spirit of Folk. So, let yourself go and breathe in these vibes.

“Fall Again” is the latest track by Lena Minder, a Swiss-born, Berlin-based singer-songwriter whose sonority is an exciting mix of folk and pop with both Americana and Pop bits. The track talks about lost love and the mixed feelings of what’s next and if there are chances of returning to the same feelings with that person. At the same time, there is an intentional theatrical vibe in the background of the track that can also be interpreted as an ironic take on the matter. Well, for us this is a nice sounding track that finds in a tender-melodic vocal capacity some very harmonious catchy feels, with the instrumentalization and exceptional production making the track pop outright to our ears every single time we listen to it.

Summer folk-pop with epic strings and infectious melodies. Margo Ross is a former Brooklynite making her debut from the forests of Upstate New York with her striking folk-pop sound, having produced her album with Ian Hersey, former band member of Rubblebucket. “Prairie Life” is the title track of her debut album and one difficult to let go of. Starting hitting all the catchy elements, natural folky but also high-paced and fully instrumentalized, it’s with her almost spoken-singing that easily transforms in and out of complex melodies, that she shines the most. But there is also a piano, a violin, and some sounding ever-growing drums (that actually maintain the same flow the whole track). 3 minutes and 33 seconds just make us want to dive into the whole album like Summer is here and we are living a prairie life.

“This is the anthem that transgender kids are asking for”. We can’t tell you how many times we’ve received pitches like this one recently. We are glad for that, but the song needs to step up the call. Well, Rascal Miles is certainly a big strong name in the music industry mainly because of the way Rascal’s tracks sound genre-independent, fragile, melodic, and with beautiful stories being narrated. “Tailor-Made” is a track that has every bit of folk-rock we need to step up into one of the great tracks released this year. Ever-evolving the track produces itself on a set of very flexible strings (pun intended with what the video portrays), gorgeous vocal hooks, and a steady-constant folk vibe of guitar and drums that perfectly serve a story. A story about a trans-non-binary man that is sure what are their feelings towards the world. And a track for everyone to listen to and feel.

“The Rabbitts are a couple in love; two travelers with a passion for music”. They are Lucy and Odhran, they met at the university in the UK, and since then have been making music together. Naturally folk, romantic, good vibed with the acoustic guitar marking the rhythm almost every time, their vocal melodies and constructions are what we love the most. In “Life & Love” they sound classic but still gather their ways of sounding modern and relevant. Every time they introduce the guitar hooks we feel they are here, right next to us. There are so many elements in a track that at first instance sounds simple, that the urge to listen to it time and time again is undeniable. In 2021 they are releasing one single on the last day of each month. We recommend you to get on their hype and be on board with this.

With a new EP “Lay Low” released 2 months ago, Tommy Ashby impresses with the lead single “Whiplash“. Somehow between the depth of Ben Howard folky-rock tracks but with a more distinct pop vibe incorporated, this is a hybrid track that never falls short of impressive. Might be because of the vocal harmonies, might be because of the capacity to lyrically impress, but may also be because everything seems so well put together that we can actually focus on a lot of different elements in the track. The track is naturally catchy too, with “Be my better side (with high hopes)” being among the best original “romantic” bits we’ve heard this year in a track. In his words, “Whiplash” is “about two people who were around each other growing up but were very different and never quite had the chance to get together. As they grow up, they find themselves always looking for each other in a crowd, imagining what a certain situation would be like if they were there. As they grow up and struggle through various things, they lean on each other for support, creating a little bubble that they can live in“.

William Fitzsimmons – Dancing On the Sun

Over the course of his career, William Fitzsimmons has made his living writing a specific brand of honest and inward-looking folk songs that fearlessly and candidly examine the evolving self while dexterously communicating his talent for robust melodies and catchy instrumentation. That is also the subject matter that is present in his latest album “Ready the Astronaut” that is out for about one week now. “Dancing On The Sun” is a track that is part of the album, and talks about the undeniable force that love has on all of us and that sometimes leads to acts of unfathomable sacrifice but also to unspeakable harm. Melodically wise this is a track that merges folk with indie rock like they always were meant to be together and once again attests to the quality of William as a songwriter. From the rock-guitar elements to the vocals that feel at times “alien” cutting through the familiar feeling that is felt the most. The video that illustrates the song is among the best video clips we’ve seen this year and is signed by the filmmaker and animator Zach Bell.